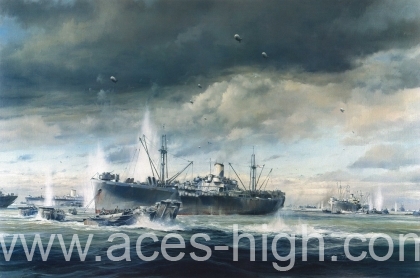 On 6 June 1944 no fewer than 4000 ships landed 133,000 assault troops on the beaches of Normandy. A further 23,000 parachuted in, whilst Allied aircraft flew 14,000 sorties on that historic day. By the end of August 200,000 seamen had transported two million troops across to France. It was the greatest and most successful military invasion in history, which led to the downfall of Hitler's Germany, and the end of the war in Europe.

Robert's famous painting, originally published to commemorate the 40th Anniversary, captures the very essence of the herculean battle that took place on D-Day. The scene is dominated by one of the many large transport ships, lowering her landing craft under bombardment from shore batteries as barrage balloons fly overhead. Against all odds, this huge fleet is sailing into the teeth of the German defences to land the Allied invasion forces. The battle for Normandy has begun.

“I have never seen a better or more accurate depiction of the landings. Robert Taylor did his research well, down to the exact state of the sea and weather”.

Each print has been personally signed by the artist Robert Taylor as well as the commander of the 231st Infantry Brigade of the British Army that spearheaded the assault on the west section of Gold Beach and was instrumental in the capture of Arromanches: