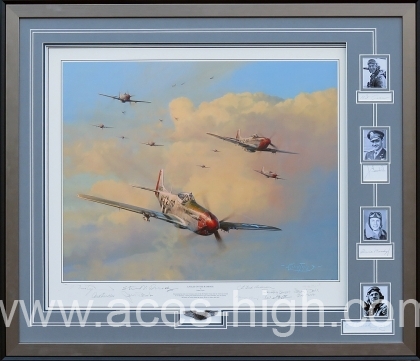 Dominating the skies over Germany, P-51s of the 4th Fighter Group – The Eagles - sweep across the cloud tops, their pilots scanning the distant horizon for any signs of the Luftwaffe. They are ready for trouble should the enemy decide to chance their luck.

The oldest fighter unit in the 8th Air Force, the 4th Fighter Group were the first to penetrate German air space, and the first to engage the Luftwaffe over Berlin. Hermann Goering later remarked ‘When I saw those Mustangs over Berlin, I knew that the war was lost’.

It is fitting therefore that Robert has chosen them in this now famous painting to represent all the pilots who flew P-51s with the USAAF.

Adding great historical importance, this Limited Edition is signed and authenticated by an astonishing TEN Aces who flew Mustangs in Europe during WWII, between them scoring almost ONE HUNDRED victories! Alongside this our expert framing team have mounted the original autographs and photos of a further FOUR famous P-51 Mustang pilots.

A unique FOURTEEN signature tribute to all those who flew the P-51 Mustang! The full list of signatures reads: