EAGLES ON THE RAMPAGE 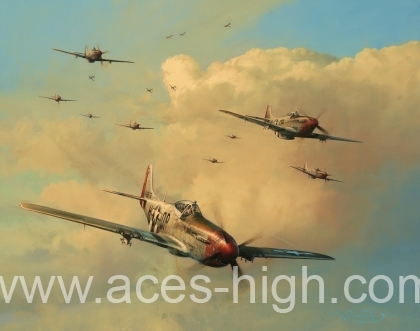 Dominating the skies over Germany, P-51s of the 4th Fighter Group – The Eagles - sweep across the cloud tops, their pilots scanning the distant horizon for any signs of the Luftwaffe. They are ready for trouble should the enemy decide to chance their luck. . . .

Formed in September 1942 from the RAF Eagle Squadrons, the Fourth Fighter Group was the oldest fighter unit in the Eighth Air Force; Under the command of the legendary Don Blakeslee, described as ‘probably the best fighter leader of the war’, the combined air and ground victories notched up by ‘The Eagles’ during World War II surpassed any other fighter group. They were the first to penetrate German air space, and the first to engage the Luftwaffe over Berlin. Hermann Goering later remarked ‘When I saw those Mustangs over Berlin, I knew that the war was lost’.

It is fitting therefore that Robert Taylor has chosen the Fourth Fighter Group for his classic painting to represent all the pilots who flew P-51s with the USAAF.

The first release in this series, Horrido!, was a tribute to the Luftwaffe Aces of WWII and was a huge success, completely selling out. Just like Horrido! each print in Eagles on the Rampage is personally signed by TEN Aces, and the two are identical in size and editions, giving collectors the opportunity to acquire matching numbers and create a classic pair. The signatories in this outstanding edition include some of the most famous Mustang pilots to fly in the European Theatre during World War II, creating a historic collectors’ edition which may never be surpassed.

Each print has been individually hand-signed by TEN of the USAAF’s Aces who flew Mustangs in Europe during World War II and amassed almost ONE HUNDRED VICTORIES between them:

This SIXTEEN signature edition is a rare gem in the world of collecting, carrying the signatures of some of the most significant American P-51 Aces in Europe. Featuring all the signatures of the Aces Edition, each of the fifteen Eagles Edition prints is issued with a unique ORIGINAL pencil drawing, from artist Robert Taylor; each drawing is personally signed by two further P-51 Aces, including the legendary leader of the 4th Fighter Group Don Blakeslee, and is conservation matted to include the original pencil signatures of a further four Mustang Aces:

Exclusively limited to just FIVE pieces worldwide, this is one of the most special editions to be released and is sure to be highly collectable in the future. With all the components of the Eagles Edition, the original drawing is a classic Masterwork, larger and more elaborate and something to treasure in its own right. The drawing is signed by a further four Mustang Aces and conservation matted to include the signatures of a further five legendary P-51 Aces. The TWENTY FIVE signatories in the Tribute Edition amassed almost 265 victories between them: