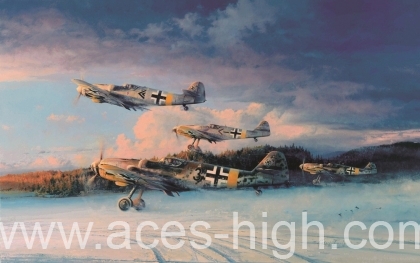 On Thursday, August 24th, 1944 a 22-year old Oberleutnant Erich Hatmann powered his Me109G fighter in a spectacular low pass over his squadron's airstrip in north-eastern Romania, wagging his wings to the cheering Luftwaffe personnel on the ground below. The young flaxen-haired pilot had just become the first fighter Ace in history to bring down 300 enemy aircraft in combat.

In this dramatic rendition, the world’s number one aviation artist captures a brilliantly colourful mid-winter scene during the final phase of war on the Eastern Front. Glinting in the sub-zero early morning sunlight as fresh sow begins to fall, and led by their Gruppenkommandeur Erich Hartmann, the Me109G fighters of I./JG53 scramble off the snow covered airstrip at Veszprem in Hungary, February 1945. They will intercept waves of Russian fighters and bombers in the skies above Czechoslovakia in a last ditch attempt to repel the impending invasion.

Specially published as the second in a commemorative set of three highly restriced editions, each print has been individually signed by Erich Hartmann in 1990.

As a tribute to the world's greatest fighter Ace, seven fellow Luftwaffe pilots have joined Erich Hartmann in signing part of this second issue in the Hartmann trilogy.  As comrades-in-arms, they all flew with JG52 or JG53, the two groups with which Hartmann scored his victories.