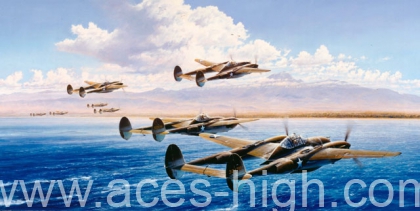 Doug Canning breaks radio silence to call the sighting of Admiral Yamamoto's flight over the pacific island of Bourganville, 18 April 1943. After a two and a half hour, four hundred mile flight just above the waves, mission leader John Mitchell and his 16 ship raiding party push their P-38s to full power to complete one of the most remarkable ambushes in aviation history.

Each print is signed by all NINE surviving P-38 Lightning pilots who flew the most successful intercept mission of World War II:

As a tribute to the many personnel who played vital roles behind the scenes, some at great personal risk, to enable the success of the Yamamoto mission, a small edition of just 50 Publisher Proofs was issued.  Each Publisher's Proof comes with a matching-numbered companion print reproduced from an original drawing, The Back-Room Boys, by Robert Taylor.  Each print carries the signatures of a group of personnel who contributed in an important and significant way to the success of the Yamamoto mission.