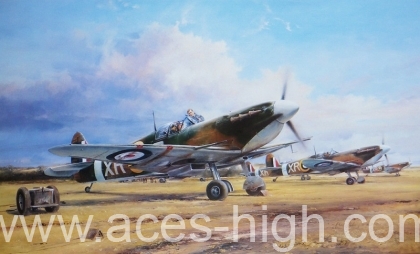 There is a thunderous roar of Merlin engines as the American volunteers of 71 Squadron RAF power up their Spitfire Mk.Vbs ready to scramble into action, summer 1941.

Under American law, in 1940 it was illegal for United States citizens to join the armed forces of foreign nations and yet many hundreds of American citizens volunteered to fly with the RAF and RCAF, in fact they even formed their own squadrons – the Eagle Squadrons.

One of the most famous Eagle Squadron pilots was Jim Goodson who flew Spitfires in 1940 and later transferred to the USAAF 4th Fighter Group in September 1942 and also served with the 31st Fighter Group. Highly-regarded as both a Spitfire and P-51 Mustang pilot, he finished the war an Ace with 15 victories.

“I have never come across an artist who can bring aircraft, and the scene they are within, so completely to life.” Jim Goodson

Robert’s pulsating piece serves as a lasting tribute to the brave young volunteers of the Eagle Squadrons who helped shape the course of the war in Europe. This famous edition is personally autographed by the artist and Jim Goodson, creating a memorable collector’s piece to be cherished for future generations:

Our expert team have conservation matted this Limited Edition print to full conservation standards to include a photograph of Jim ‘ Goody’ Goodson.