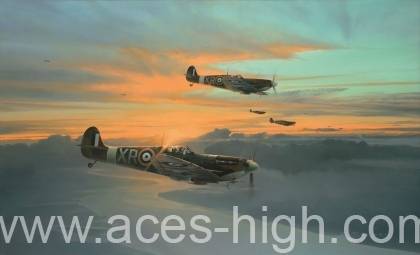 Robert Taylor’s magnificent painting features Spitfire Vbs of 71 Squadron RAF as they return to their base at North Weald, September 1941, the young American pilots perhaps taking a brief moment to marvel at the myriad colours of the late evening sun – welcome relief from the perils of recent air combat with the Luftwaffe high above the English Channel.

This superb release from the master of aviation art is simply outstanding, a really classic piece. The Eagle Squadrons have reached iconic status amongst collectors and Roberts’s painting combines a magnificent portrait of the Spitfire with outstanding signatures.

The entire edition is personally authenticated by some of the most highly regarded Eagle Squadron pilots to have flown with the RAF.

Issued with a matching-numbered companion drawing EAGLE SQUADRON by Robert Taylor, each Eagle Edition print is additionally signed by:

Issued with a MATTED companion print, each Tribute Proof is additionally signed by: