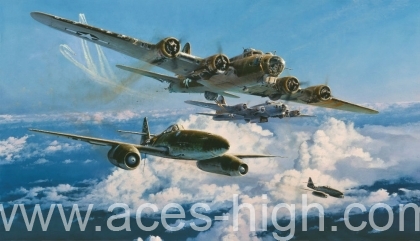 The revolutionary Me262 jet was unleashed just too late to change the course of the war – but it still created havoc amongst the bombers of the Eight Air Force as Robert Taylor’s poignant masterpiece depicts.

Had the Me262 been developed solely as an interceptor it would have blunted the ever increasing, deep-penetration American daylight bomber raids into Germany. It might even have slowed the advance long enough to alter the course of the war. But Hitler under Goring’s advice, refused to bend in his belief that the new wonder jet be used as a bomber. By the time he relented in November 1944, it was too late.

Using the remarkable skills that have made him the most collected aviation artist in history, Robert Taylor graphically brings to life the potency of the Luftwaffe’s radical new jet in his famous painting, Combat Over The Reich.

Set against a breathtakingly beautiful aerial panorama, he vividly depicts a heart-stopping drama that took place on 19 March 1945. It was the day when a force of 28 Me262 jet fighters from JG7 intercepted a formation of B-17s of the 452nd Bomb Group en route to bomb the oil refinery at Zwickau, 60 miles south of Dresden. Closing at a speed almost three times as fast as their targets, each jet pilot has but a fraction of a second to find his mark and the B-17 gunners have milliseconds to respond. Within the blink of an eye the interception is over. The main B-17 has lost part of its tailplane but with luck and a skilful pilot, the battered bomber will make it home. The encounter occurred during a five-day period when the small band of Me262 fighter pilots were credited with over 50 Allied aircraft destroyed. But the damage inflicted by the Me262s was too late – within weeks Germany had surrendered.

Thanks to the advances in high-definition Giclée technology this superb original oil painting, one of Robert’s most iconic images, can now take its place as the latest GICLÉE STUDIO PROOF ON CANVAS.