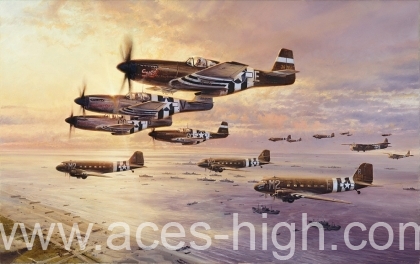 This superb three print set which includes the companion prints INTO BATTLE and CRASH LANDING, was issued in June 1994 to commemorate the 50th Anniversary of D-Day and was hailed by veterans as one of the most realistic portrayals of the events of 6 June 1944 by any artist. Seen crossing the Normandy coast are C-47 Dakotas of the American 438th Troop Carrier Wing towing Waco gliders and closely escorted by P-51 Mustangs of the 354th Fighter Group. Below them, landing craft swarm ashore.

Everything about this spectacular painting brings alive the events of that momentous day, not least that they were signed by no less than SIX combat pilots who played a significant part in the D-Day air operations - a Waco Glider PIlot, four Mustang Aces and a C-47 Pilot.

But the edition that catches the eye today, and is the most valuable, was the small collection of prints issued to raise funds for the American Air Museum at Duxford, where a plaque recognising those fund raising efforts hangs to this day.

This special edition consists of 350 prints which were additionally signed by some iconic men: firstly the great comedian and film star Bob Hope whose unstinting devotion continued to lift the spirits of the Allied troops throughout the war. Then there was the Hollywood screen icon Charlton Heston who also did his bit whilst serving as bomber crew in the USAAF, Field Marshal Lord Bramhall, who landed in Normandy during the invasion and went on to become Chief of the Defence Staff during the Falkand conflict. And finally Colonel Bob Gates, who commanded the squadron depicted in the painting and who, between combat missions, was Bob Hope’s favourite pilot across war-torn Europe.

No wonder then that these prints are so hard to find, but we do sometimes come across a copy, so please ask.

Joining artist Robert Taylor in signing every print are six veterans who took part in operations on D-Day:

Each print in the Remarque Editions is additionally signed by three veterans who served with the famous 101st Airborne Division:

Strictly limited to just five copies worldwide, Robert will create an extra-large drawing across the bottom of the print, creating a completely unique and stunning collector’s piece like no other!

These EIGHTEEN signature deluxe remarques are additionally autographed by the following veterans who took part in the Allied push for victory in Europe: