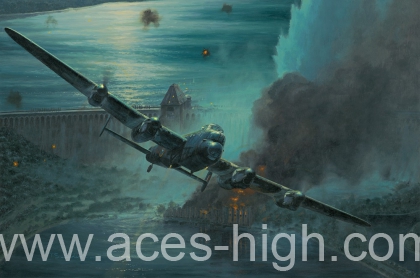 The fifth aircraft to attack the Möhne dam on the night of 16 / 17 May 1943, Flt.Lt. David Maltby powers Lancaster AJ-J away from the target as his Upkeep mine successfully detonates against the already damaged dam wall. Within seconds the dam will rupture releasing a terrifying wall of water flooding into the valley below.

This prestigious limited edition portfolio, issued as a lasting tribute to the Dambusters and the men of 617 Squadron, includes an individually numbered copy of the book THE DAMBUSTERS. Presented in its own luxury embossed slipcase, each book is accompanied by a matching-numbered copy of Anthony Saunders’ dramatic limited edition print COUP DE GRÂCE – THE MÖHNE DAM.

Joining artist Anthony Saunders in signing every print of Coup de Grâce is one of the most highly-regarded veterans who ﬂew on the Dambusters Raid:

With all the components of the Limited Edition, each book contains a special collector’s bookplate signed by seven Aircrew who ﬂew with 617 Squadron during WWII:

Recognising the incredible sacriﬁce made by the airmen of Bomber Command, this highly restricted edition comprises all the components of the 617 Squadron Edition, but the collectors’ bookplate is additionally signed by 28 aircrew who served with great distinction in RAF Bomber Command during WWII:

To commemorate the 133 airmen who took part in Operation Chastise, this historic and exclusive edition comprises all the elements of the Bomber Command Artist Proofs but includes an additional bookplate which is personally autographed by EIGHT veterans of the legendary Dambusters Raid:

The Dambuster Edition is further enhanced by the inclusion of two remarque editions, each containing an original pencil drawing, crafted to order by artist Anthony Saunders in the lower margin of the print.

With all the components of the Dambusters Edition, each highly-collectible FIFTY SIGNATURE portfolio is issued with a unique original pencil drawing by Anthony Saunders which is signed by two of the most iconic pilots ever to ﬂy with 617 Squadron:

Each drawing has been conservation matted to include the signatures of six more highly-decorated Bomber Command aircrew: