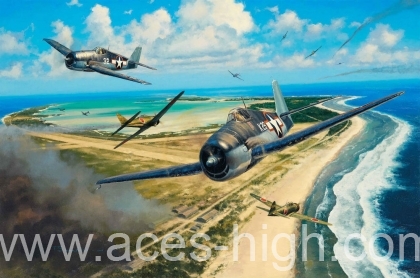 On 23 December 1941, just days after their infamous attack on Pearl Harbor, the Japanese captured Wake Island, a small, but strategic coral atoll in the western Pacific.

The small garrison of mainly US Marines had already repulsed one landing but, on 23 December, the Japanese succeeded. Wake fell, as had Guam before it and now, across the breadth of the south-west Pacific, islands large and small tumbled like dominos, as did Hong Kong, Malaya, Singapore, Java and Burma. By March Australia stood on the brink of invasion and the might of Imperial Japan seemingly reigned supreme.

But Pearl Harbor was a hollow victory. Although the US Navy had suffered a calamity, the Japanese had failed to destroy the American carriers; a legacy that would soon return to haunt them. After stalemate at the Battle of the Coral Sea, there was no doubt of the outcome at the Battle of Midway where the American carriers inflicted a catastrophic defeat on the Japanese, who lost four carriers, a heavy cruiser, over 300 aircraft and 5,000 officers and men.

Fought at the beginning of June 1942, Midway marked the turning of the tide; the US Navy, its aviators and the Marines were back, stronger and more determined than ever. From now on the Japanese would be on the defensive. Over the next two years, the US Navy would build the largest naval force the Pacific had ever seen and one by one, island by island, base by base, the Allies would slowly advance in some of the bloodiest and most costly campaigns of World War 2.  The Japanese now faced only the spectre of humiliation and defeat.

Anthony Saunders’ stunning painting graphically recalls a moment during the Allied fight-back. On 5 October 1943, ten months after the island had fallen to the  Japanese, American naval aircraft raided Wake, one of many such operations carried out by the US Navy and Marines. At the forefront of the attack was Lt. Cmdr. Edward ‘Butch’ O’Hare, the US Navy’s first Ace and first Naval recipient of the Medal of Honor. Throwing his F6F Hellcat into a furious dogfight, he engages Japanese Mitsubishi A6M Zeroes based on the island and in the process adds two more victories to his tally. Under O’Hare’s experienced guidance his young wingman, Lt. Alex Vraciu, claimed his first kill, and would later become one of the foremost Aces in the US Navy with 19 victories.

Each print in every edition has been personally signed by the artist along with a highly-distinguished Fighter Pilot who flew in combat in the Pacific theatre during WWII:

Widely considered as some of the best and largest in the industry, Anthony’s unique pencil remarques are individually created in the lower margin of the print. The first edition, consisting of 15 single sized remarques similar in concept to the drawing depicted, are a perfect way for enthusiasts to collect original art.

Limited to just five copies worldwide, each print is issued with an original pencil work, created to order by artist Anthony Saunders. Each drawing is conservation matted to include the original autographs of three US Navy Aces who flew Hellcats in the Pacific Theatre, including Alex Vraciu!