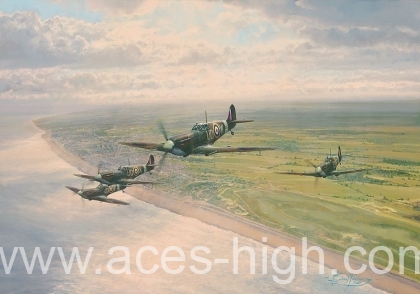 The Luftwaffe had been held at bay, and with the Battle of Britain won, the Royal Air Force turned its attention from one of defence to a more offensive stance. Having played a pivotal role in Britain’s dogged defence, in November 1940 Air Chief Marshal Sir Hugh Dowding was replaced as Air Officer Commanding-in-Chief of Fighter Command by the more aggressively minded Sir William Sholto Douglas and given the task to quickly rebuild his Command’s strength and then seize the initiative.

Dowding wasn’t the only casualty of the RAF’s new approach; Air Vice-Marshal Keith Park, head of 11 Group during the Battle of Britain, was replaced by Air Vice-Marshal Trafford Leigh-Mallory, previously head at 12 Group and a man whose support for Bader’s ‘Big Wing’ tactics was enthusiastically shared by Fighter Command’s new commander-in-chief.

Throughout 1941 Fighter Command took the war to the enemy with ever-increasing strength and offensive patrols, especially ‘Circus’ operations – the codename for large-scale sweeps over northern France with Fighter Wings providing cover for small formations of light bombers, usually Blenheims, to attack strategic targets such as airfields, power stations and railway marshalling yards, and specifically designed to lure up the Luftwaffe’s fighters into combat.

Robert’s stunning painting depicts a scene in August 1941 with a section of Mk.Vb Spitfires from 452 Squadron, led by top Irish Ace Flight Lieutenant Brendan ‘Paddy’ Finucane DFC, as they head out over the Kent coast on an offensive patrol across the English Channel.

With all the hallmarks of a classic Taylor masterpiece, this stunning edition also carries the original signature of highly-regarded RAF Spitfire pilots who flew during this crucial period.

Along with artist Robert Taylor, every print carries the original signature of one of the RAF’s most successful and high-scoring Aces, who flew Spitfires with the Biggin Hill Wing during the period depicted:

This highly-restricted SIX signature edition is issued with the matching-numbered companion print ON FINALS INTO KENLEY – a detailed study of Brendan ‘Paddy’ Finucane on his return to base after another arduous mission. Each copy is personally signed and hand-titled by the artist Robert Taylor, and carries the signatures of five famous Spitfire pilots who flew in combat with the RAF during WWII: