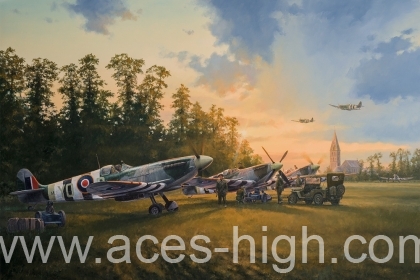 Months of planning had gone into preparing for D-Day and success, or failure, hinged on a myriad of operations working like clockwork. The logistics involved were staggering; 18,000 Allied paratroops would be dropped to support the 132,000 troops that would land on the first day along with 6,000 vehicles, including 900 tanks, 600 field guns and some 4,000 tons of supplies, all transported and protected by a naval armada of 7,000 vessels, the largest fleet ever assembled. No one doubted the bravery and heroism of all those about to be involved but, as with Hitler’s proposed German invasion of Britain in 1940, victory could only be achieved through total air superiority.

Unlike the Luftwaffe in 1940, however, by 6 June 1944 the Allies had full control of the skies over the Channel but they were taking no chances; over 14,000 sorties were undertaken on D-Day to support and protect the invasion. But the return Channel crossing took up precious hours, time better spent providing air cover over the beachheads and forward positions. Following the combat troops ashore on D-Day were the specialist engineers tasked with the construction of temporary advanced landing strips for the Allied fighters. In the space of a few days earth movers had cleared runways, engineers had laid steel mesh tracking, installed landing lights, communication centres and brought in fuel and ammunition. In a herculean endeavour over 20 such airstrips were open and operational by the end of June.

One of them, B-4, was at Bény-sur-Mer, a village a few miles inland from Juno Beach that had been liberated by the Canadians on D-Day. The airstrip, completed by the Royal Engineers within days of the first landings, was opened on 15 June and, fittingly, one of the first squadrons to take up residence was 401 Squadron RCAF, the unit chosen by Anthony Saunders to take centre stage in his evocative painting Breakout From Normandy. Equipped with Mk.IX Spitfires the squadron is seen preparing to head out on an evening sweep during the last days of June 1944.

Faithfully reproduced as a Limited Edition print, each copy has been personally signed by artist Anthony Saunders and serves as a fitting tribute to all those who flew and fought in Normandy during the campaign to liberate France.