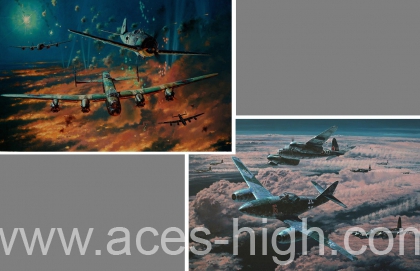 This powerful pair of prints depicting the bitter struggle in the skies over Germany are available individually or as part of a matching-numbered pair.

On the night of 23/24 August 1943, a lone Fw190 of the Luftwaffe’s crack unit JG300 Wilde Sau, defiantly engages a force of RAF Lancasters in the heavily defended, flak-torn skies over Berlin. With the heavy bombers illuminated by bursting flak and the fires of the burning city below, the Luftwaffe pilot engages his target, just one of over 700 RAF long-range bombers thrown into the assault that night.

It was the opening salvo to the Battle of Berlin, the long and bitter aerial offensive against Hitler’s seat of power that would rage throughout the winter to follow. From November 1943 till March 1944 RAF Bomber Command would make 16 massed attacks on Berlin. When the battle was over, the capital of the Third Reich lay shattered and in ruin, but the crews of RAF Bomb Command had paid a heavy price - 492 aircraft failed to return.

Each print in all of the editions has been individually signed by the artist and two RAF Bomber Command veterans who flew Lancasters on night time bombing raids over Germany along with one of the Luftwaffe’s most respected night fighter Aces:

In a desperate attempt to save what remained of the once-proud, now ruined city of Berlin, the remnants of the Luftwaffe’s beleaguered night-fighter units fought boldly till the end. Short on fuel, spares and ammunition, the pilots of NJG11 faced the impossible task of protecting the shattered capital from the far-reaching arm of the RAF Bomber Command.

As the climax of the inevitable defeat approaches, Leutnant Jorg Cypionka of 10./NJG11 engages a powerful incoming force of fast, high-flying RAF Mosquitos from 139 (Jamaica) Squadron (PFF) in one of his unit’s few remaining Me262A jets. The Mosquito crews, however, know the dangers of these hotly contested skies over Berlin only too well. From the night of 20/21 February the aircraft of 139 Squadron will run the deadly gauntlet of flak and night-fighters on 36 consecutive night attacks on the city.

Each print in every edition has been hand numbered and personally signed by the artist and two highly respected RAF Mosquito aircrew who flew over Berlin along with one of the Luftwaffe's most prominent Me262 night-fighter pilots: