Home > Artists > Anthony Saunders > BACK FROM THE FIGHT

BACK FROM THE FIGHT 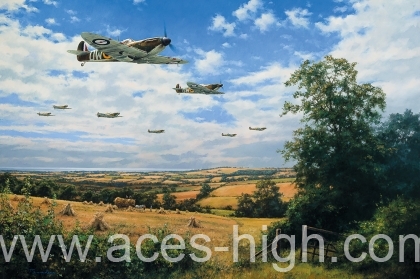 Throughout August 1940 the second phase of the Battle of Britain was in full swing as the Luftwaffe turned their full attention to the destruction of Fighter Command’s 11 Group airfields. The summer skies over Kent and the south-east of England saw the young RAF fighter pilots in almost continuous action as they sought to repel Goering’s raiders. But, by October, Fighter Command’s tiny force of just under 3,000 had achieved the impossible; against the odds they had halted and repelled the mighty Luftwaffe, then the largest and most modern air force in the world. Hermann Goering and his cronies in German High Command had seriously underestimated the skill, determination and resilience of the men from RAF Fighter Command. A few months before, Hitler had been pouring scorn on Britain for its refusal to surrender; now he was forced to eat his words.

Anthony Saunders’ beautiful painting Back From The Fight transports us to the morning of Monday 12 August 1940, a day when 11 Group airfields at Hawkinge, Manston and Lympne airfields all came under heavy attack from Luftwaffe raiders. With the harvest well under way below them, the Spitfires of 610 Squadron, led by S/Ldr John Ellis, return to re-fuel and re-arm after a tense encounter with Luftwaffe fighters, an engagement in which they were credited with several victories, including two claimed by the Squadron Leader.

Faithfully reproduced as a fine art limited edition and printed onto borders that were personally signed many years ago, very copy in the edition carries the original and authentic autographs of three distinguished fighter pilots and aircrew who flew in combat during the Battle of Britain. Each man bravely earned the right to be known as one of ‘The Few’ and have sadly since passed away which gives even greater meaning to the release and creates a remarkable collector’s piece to be cherished for future generations.

Along with the artist Anthony Saunders, every print carries the original signatures of three highly-regarded Battle of Britain veterans:

Widely considered as some of the best and largest in the industry, Anthony’s unique pencil remarques are individually created in the lower margin of the print. With all signatures of the Limited Edition and consisting of just 25 single sized remarques worldwide, these are a perfect way to collect original art. However, the demand for these superb creations is such that we urge collectors to reserve their remarques early to avoid disappointment.