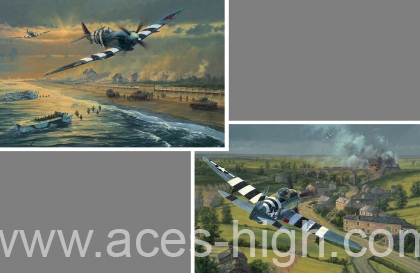 This exciting pair of prints released to commemorate the 65th Anniversary of the D-Day landings are available individually or as part of a matching-numbered pair.

This superb piece depicts Spitfires of 412 Canadian Squadron making a fast run over Juno Beach in support of the Third Canadian Division storming ashore. By the end of the day more than 21,000 men had landed on Juno, the second most heavily defended of all the D-Day beaches, with the Canadians advancing further inland than any other Allied troops.

Each print in every edition has been hand numbered and personally signed by the artist as well as two highly distinguished Spitfire pilots who flew combat over the D-Day invasion beaches:

This classic edition shows P-47 Thunderbolts from the 78th Fighter Group launch a blistering high-speed, low-level attack on a German freight train in occupied northern France, June 1944. In the weeks following D-Day, the pilots of the 78th FG would fly almost continuous missions to seek out any German vehicles, positions and forces they could find; and cause chaos and mayhem to the enemy’s lines of communication ahead of the advancing Allied forces.

Every print in all of the editions is individually hand numbered and personally signed by the artist and two highly-respected USAAF fighter pilots, who flew interdiction missions in P-47s during the Normandy Invasions: