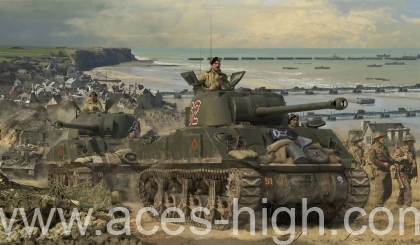 Clearly visible in Simon’s detailed piece, the new ‘Mulberry’ is working flat out with reinforcements pouring ashore and one of the floating roadways being used to evacuate the wounded onto ships soon bound for England. In the foreground recently-arrived Sherman Firefly tanks from the 13th /18th Hussars climb away from the area as they move out towards the front line alongside infantry from The Devonshire Regiment. In the days to follow both regiments would fight with great distinction.

Easily identified by the long barrel of its British 17-pounder gun whose bright muzzle flash inspired its nickname, the ‘Firefly’ was considered the most deadly version of the iconic Sherman tank and, being the only Allied tank in Normandy with a gun powerful enough to penetrate the thick armour of the German Panther and Tiger tanks, it was greatly feared by the enemy.

To help commemorate the 75th Anniversary of D-Day and to remember the heroes who served in the Battle of Normandy, each print in this memorable edition has been authenticated by veterans who fought bravely in this historic campaign.

Joining artist Simon Smith in signing every print is a highly-regarded Tank Commander who served in Normandy:

These four signature editions are additionally autographed by a further three veterans directly involved in the Normandy Campaign and the fighting around Arromanches:

Simon’s background as a commercial illustrator and his passion for military history are immediately evident through his subtle use of pencil and attention to detail. With a specially commissioned pencil drawing hand created in the lower margin of each print, these stunning four signature editions are highly collectible pieces.

With TWELVE signatures and an original pencil drawing!

With all signatures of the Anniversary Edition, each print is issued with a separate specially commissioned original pencil drawing by Simon Smith which has been signed by seven Normandy veterans:

Each unique drawing is conservation matted to include the original pencil signature of a famous veteran who served with distinction in Normandy:

The Giclée Proofs on Canvas

Using the most sophisticated digital Giclée technology, each Canvas Proof is printed directly on to fine canvas creating the look and feel of an original painting. Each canvas is fully authorized and personally signed by the artist, stamped on the back, hand numbered and titled.

This is un-signed by the artist or veterans and is smaller than the Limited Edition.