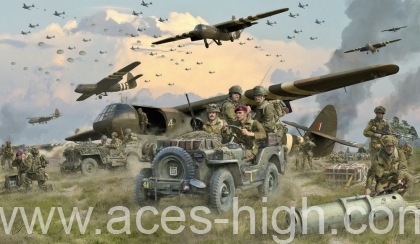 By September 1944 there was growing Allied optimism in France; having broken out of Normandy their armies were now pushing steadily west. Yet as the enemy fell back the Allies’ supply line was becoming dangerously stretched. Newly-promoted Field Marshal Montgomery therefore argued that these limited resources be concentrated into a single push into the Netherlands, aiming to turn the German flank. Eisenhower disagreed, preferring a broader advance towards the Rhine. But, as a compromise, he did give Montgomery their one available reserve, the First Allied Airborne Army, with which he could try and seize bridges in the Netherlands to allow for a dash to the Ruhr in an operation code-named Market Garden.

There were, however, flaws: planners failed to act upon intelligence that two crack SS Panzer Divisions were among many German forces regrouping near Arnhem and, due to insufficient aircraft numbers and bad weather, it would take several days to deliver the entire British force into theatre.

Simon's graphic portrayal depicts a scene on the first day of Operation Market Garden as, early in the afternoon, glider borne infantry from the British 1st Air Landing Brigade successfully secure ‘DZ-X’, the drop-zone on Renkum Heath several miles to the west of Arnhem. Overhead paratroopers from the 1st Parachute Brigade begin their drop from USAAF C-47s.

To commemorate the 75th Anniversary of the fierce battles at Arnhem and to remember the heroes who served during Operation Market Garden, each print in this memorable edition has been authenticated by veterans who fought bravely as the Allies pushed for victory in Europe during WWII.

Joining artist Simon Smith in signing every print are two veterans who served with the Glider Pilot Regiment at Arnhem:

Simon’s background as a commercial illustrator and his passion for military history are immediately evident through his subtle use of pencil and attention to detail. With a specially commissioned pencil drawing hand created in the lower margin of each print, these stunning two signature editions are highly collectible pieces.

The Victory In Europe Tribute Edition

With all signatures of the Limited Edition, each print is issued with a separate, specially commissioned original pencil drawing by Simon Smith which has been signed by seven veterans who fought in Normandy, Arnhem and the Allied push for victory in Europe:

Each unique drawing is conservation matted to include the original pencil signatures of a further two famous veterans who served with distinction during Operation Market Garden:

The Giclée Proofs on Canvas