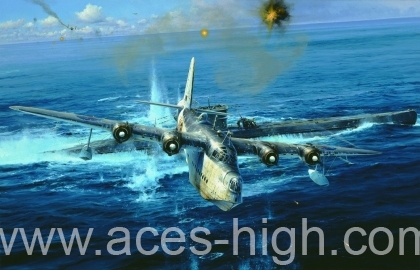 "The only thing that ever really frightened me during the war was the U-Boat peril." - Sir Winston Churchill

The Battle of the Atlantic was fought by the Royal Navy and RAF Coastal Command against the U-boats.  It was a long, deadly struggle in which Hitler's prized U-boat fleet attempted to starve Britain of food, fuel and the materials of war by destroying the convoys that kept it supplied. The effective use of depth charges by Allied aircraft demanded an attack from extremely low level, but with each submarine armed with 10 cannons, the danger to the aircrews was immense.

On 30 July 1943 Short Sunderland flying boat 'U' of 461 Squadron RAAF attacked and sank one of three German submarines caught on the surface in the Bay of Biscay. In an ironic twist of fate the submarine was also U-461.

Robert Taylor's dramatic and powerful painting depicts Sunderland 'U' at extremely low-level, enduring a barrage of gunfire after delivering a successful attack to sink U-461.  In an instinctive act of compassion the Sunderland pilot circled the scene to drop a dinghy to the U-boat survivors.

The signed lithograph edition of Caught on the Surface is highly sought after on the secondary market and we are delighted that, thanks to Giclee technology, this breathtaking painting can now be faithfully replicated on canvas as a 'Museum Quality' piece that can be treasured for a lifetime.