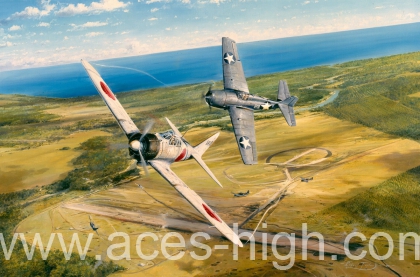 A Japanese Zero condenses the air off its wing tips as its pilot hauls his fighter inside a Marine F4F Wildcat's determined attack.  The two adversaries cavort the air in a desperate duel high over the island of Guadalcanal.  The sky is alive with fighting aircraft as F4F's and Zeros are locked in deadly combat.  Below, clearly visible through the clear tropical air is the prize over which they do battle:  a single tiny airstrip on a small, hilly, humid, almost uninhabited island - a priceless possession providing the key to air supremacy in the South Pacific - Henderson Field.

In this remarkably detailed painting the world's premier aviation artist, Robert Taylor, brings to life an episode which involved some of the most ferocious and sustained aerial dog fighting of World War II.  With rare talent and prestigious skill, Robert takes us back into the midst of the legend of Guadalcanal.