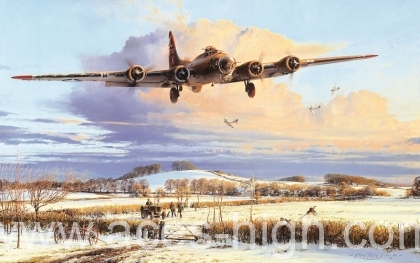 There were few sights more stirring than a B-17 Fortress on its final approach returning from a combat mission.  Aboard, the crew were exhausted, sometimes injured, but after perhaps eight hours of hazardous flying there was always a feeling of exaltation as the patchwork fields of England appeared beneath them.

In this limited edition, the last in his popular Masterworks Series, Robert Taylor recreates those exhilarating moments as a B-17 crew bring their mighty aircraft home.  The co-pilot, clearly visible, assists his captain with the landing - the aircraft has taken some damage from fighters and is a handful on the approach.  With wheels and flaps down, engines throttled back, the skipper eases the big machine gently down the glidepath towards touchdown, admist the peaceful countryside of East Anglia.

Each print is signed by four USAAF aircrew who served in England and flew the Mighty B-17 in combat.