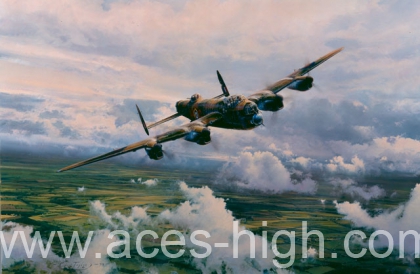 One lancaster aircraft typified the resilience of the men and machines of RAF Bomber Command: Flying with 460 Squadron RAAF, Lancaster serial number W4783, call sign G For George, took part in almost every major attack on Germany between December 1942 and its retirement in 1944, completing no fewer than 90 bombing sorties.

Robert Taylor's emotive painting shows G For George, damaged and straggling home at the back of the pack, returning from one of the famous lancaster's last grueling sorties.  This specially published commemorative edition helps aid the preservation of G for George, which proudly resides at the Australian War Memorial in Canberra.

Each print is signed by THREE distinguished Lancaster pilots, having piloted George on a total of 37 of this aircrafts 90 operational sorties.

Each print in the Aircrew Edition is signed by the following TWELVE additional signatories of RAF Bomber Command who flew a total of 48 operational sorties on 'G for George', making a total of FIFTEEN signatures:

A total of EIGHTEEN signatures, this rare G for GEORGE edition is also signed by two Commanding Officers of 460 Sqn RAAF.  Separate prints of Robert Taylor's evocative pencil drawing, UNDER THE BRIDGE, available only within the Commanding Officer's Edition, are signed by Wing Commander Peter Isaacson.