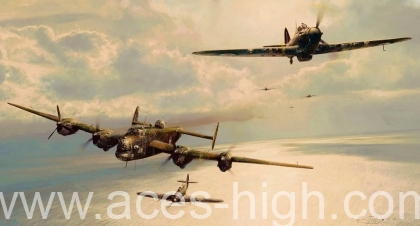 The Battle of Britain had been won by the young fighter pilots of Fighter Command, but now it fell to another band of young men to wage total warfare against the Nazi war machine – the aircrew of RAF Bomber Command.

A lone Halifax of 405 Sqn RCAF struggles home the hard way – damaged and alone. One of the aircraft’s engines is already out and another is smoking badly as the exhausted pilot and his crew fight to keep their unwieldy bomber airborne. Any marauding Luftwaffe fighters would have found them easy prey, but fortunately they have been spotted by a formation of Hurricanes from 253 Sqn on a routine patrol. For that final leg of their long journey this crew will at last have protection to see them safely back to base.

Bearing the brunt of the RAF’s incessant campaign were two heavy bombers, the stalwarts of Bomber Command - the Lancaster and the Halifax. Between them they accounted for over three-quarters of all the bombs dropped by the RAF, and Halifaxes alone accounted for a total of 73,312 operations, nearly a fifth of all missions carried out by Bomber Command.

Each print in the FOUR signature Limited Edition is personally signed by artist Robert Taylor, and individually hand-numbered; together with TWO RAF aircrew who flew Halifaxes during WWII, and TWO Hurricane fighter pilots.

In tribute to those brave veterans who flew with the RCAF during World War II, each print in this SEVEN signature edition is signed by two RCAF Hurricane pilots and five RCAF Halifax aircrew, together with the artist Robert Taylor.

The TWENTY ONE signature Collectors’ Edition has been additionally signed by the thirteen RAF aircrew who flew Halifaxes with RAF Bomber Command, and four Hurricane fighter pilots who flew escort with RAF Fighter Command:

This outstanding THIRTY-NINE signature Bomber Command Tribute Edition is issued in recognition to the outstanding airmen who flew and fought with RAF Bomber Command during World War II. Released with all the components of the Collectors’ Edition, with the addition of an ORIGINAL pencil drawing by Robert Taylor, personally signed by thirteen Bomber Command aircrew:

Each piece has been exquisitely conservation matted to include a museum quality reproduction Bomber Command Aircrew Europe Medal with France and Germany clasp, along with the original signatures of a further five legendary figures of Bomber Command: