WINGS OVER NORMANDY PORTFOLIO - Skytrain to Normandy & Ace over Normandy 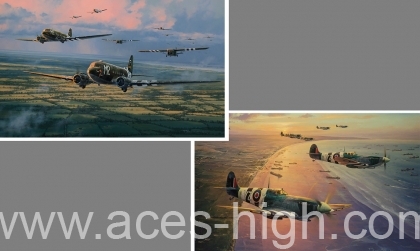 Two atmospheric Limited Edition prints – each is available individually or as a matching-numbered pair whilst stocks allow!

Both pieces commemorate the brave aircrews who valiantly played their part in the skies over Normandy as the Allies fought to liberate Europe after D-Day.

Shortly after midnight on the morning of 6 June 1944 thousands of elite American and British paratroopers began dropping into the darkness of Normandy. It marked the beginning of Operation Overlord, the Allied invasion of France and, tasked with seizing and securing the flanks in readiness for the mighty amphibious armada heading for their dawn landings, the lightly-armed paratroops were soon engaged in desperate fire-fights with the German defenders.

Throughout the day, as waves of Allied troops and armour battled their way across the blood-stained landing beaches to establish their foothold in France, glider-borne reinforcements brought in tons of weaponry too heavy to be dropped by parachute; field artillery, howitzers and ammunition essential to the airborne forces whilst waiting for amphibious re-supply. The largest of these airborne re-supply missions was Operation Elmira, the third and final assault made by the US 82nd Airborne Division and it is fitting that leading aviation artist Anthony Saunders has chosen a scene from this operation for his stunning piece Skytrain to Normandy.

Having just crossed the Normandy coast and heading towards the glider landing zones with their fighter escort are C-47 Skytrains of the 88th Troop Carrier Squadron / 438th Troop Carrier Group, one of four air transport groups taking part in the Elmira mission. Towing 36 Horsa and 14 CG-4 Waco gliders the 438th’s C-47s had departed from RAF Greenham Common soon after 19.00 hrs and will shortly make their Normandy landing zone at 21.20 hrs.

The scourge of the Luftwaffe, the Spitfire was the only Allied fighter to remain in full production and front-line RAF service before, during and after World War Two. From iconic hero of the Battle of Britain, through the Normandy Campaign and all the way to the skies over northern Germany in May 1945, the Spitfire remained one of the finest and most deadly fighters ever to grace the skies and few fighter pilots would have willingly traded their Spitfires for any other.

‘I have nothing but praise for the Spitfire, the finest of all RAF combat aircraft. It was a thoroughbred through and through....’ said highly-respected fighter Ace Sandy Johnstone who, at the age of only 24, had commanded 602 Squadron during the Battle of Britain. In June 1944 Sandy Johnstone was serving on Eisenhower’s D-Day headquarters staff during Operation Overlord and fittingly it is D-Day that artist Anthony Saunders has chosen as the backdrop to his stirring tribute to the Spitfire in her role as the Allies fought to liberate Europe – Ace Over Normandy.

Portrayed are the Mk.IXb Spitfires of 412 Squadron RCAF, one of the 55 Spitfire squadrons that took part in D-Day air operations between 5 and 7 June 1944. Tasked with providing cover, Anthony depicts the squadron at the end of a long day shortly before they finally turn for home after a final sweep to encompass the scene over Utah beach where men and armour from the U.S. VII Corps continue to pour ashore. In the foreground is the Spitfire of Don Laubman who would become one of Canada’s top-scoring Aces.