HEADLONG INTO THE CLASH 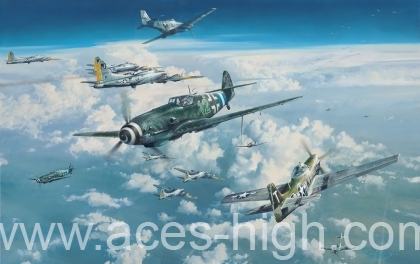 14 January 1945; and the war was not going well for Germany. The noose was tightening as American, British and Canadian armies, having broken out from their Normandy landings seven months earlier, stood on the banks of the Rhine. In the east vast numbers of Russians were driving relentlessly towards Berlin. On their bomb-cratered airfields the Luftwaffe prepared for the final onslaught during the Defense of the Reich.

Despite the shock of Operation Bodenplatte on New Year’s Eve – the Luftwaffe’s unexpected yet unsuccessful attempt to wipe out the Allied air forces on their advanced airfields in the Low Countries – Germany had all but surrendered air superiority to the Allies. Today, therefore, was yet another gamble as they assembled some 200 fighters to counter nearly 900 Eighth Air Force bombers, and almost as many fighter escorts, tasked with destroying oil refineries, storage depots and other strategic targets in central Germany. For the Luftwaffe the day was to end in retreat and disaster; they lost 161 fighters, the highest number ever recorded. Never again would the once mighty Jagdverbänd rise in strength to challenge the Mighty Eighth.

Few artists can capture the ferocity of an aerial battle with the skill and ability of Robert Taylor, and this breath-taking painting will undoubtedly rank as one of the pinnacles in his long and distinguished career. He captures a moment during that massive aerial battle in January 1945 near Ludwigslust in northern Germany, as enemy fighters from JG300 and JG301 make a head-on attack through a close formation of B-17s from the 390th Bomb Group who are heading to bomb Magdeburg. But their ever-vigilant P-51 escorts are aware of the threat and quickly engage the enemy with devastating results.

In the centre of the action Flt Lt Joe Peterburs of the 20th Fighter Group screams past the Bf109G of Lt Bruno Klostermann from II./JG300 who is attempting to penetrate the bomber formation. Peterburs claimed an Fw190 during the battle, Klostermann, however, will not survive the day.

The prints are autographed by distinguished USAAF and Luftwaffe veterans who fought during the Defense of the Reich, adding great historical importance to this stunning release. Many of the signatories are sadly no longer with us, giving aviation art connoisseurs a rare opportunity to acquire a remarkable and valuable collector’s piece.

Signed by three veterans who fought in this epic battle:

This seven signature edition is signed by a further four veterans who flew during the Defense of the Reich:

The War In Europe Edition & Remarques

These thirteen signature editions are additionally signed by:

Each print in these editions is issued with the matching-numbered companion print FIGHTER ESCORT which is signed by an additional P-51 Mustang Pilot:

Representing the ultimate in collecting, this exceptional edition comprises all signatures of the War in Europe Edition and is issued with an ORIGINAL PENCIL work specially created by Robert Taylor.

Each drawing is signed by two leading Bf109 Luftwaffe Aces and a famous P-51 Mustang Ace:

Each drawing is conservation matted to include the original signatures of a further three pilots of both the Luftwaffe and USAAF who fought in the skies over Germany as the Allies pushed for victory during WWII: