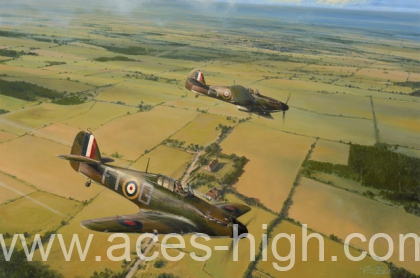 Robert's superb piece shows Tom, a Flight Lieutenant with 43 Squadron at the time, and his wingman hurry their Hurricane Mk.Is back to base at Tangmere fresh from another hectic combat high over the south coast.

In the few years before he passed away, Group Captain Tom Dalton-Morgan became a very close friend of Aces High and in fact finished writing his book in our Wendover Gallery.

Commissioned specially for the book cover, Robert's superb limited edition print TOMMY LEADER is personally signed by Group Captain Tom Dalton-Morgan, together with two famous Battle of Britain fighter Aces who flew from Tangmere and Westhampnett. Each print is personally signed by the artist Robert Taylor and issued with a matching numbered copy of Tom's autobiography of the same title.

Each Artist Proof copy has been additionally hand-signed in pencil by four fighter pilots who all flew Hurricanes during the Battle of Britain, making a total of SEVEN signatures in this edition.