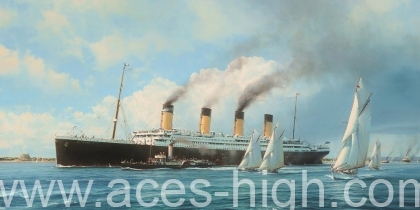 The bands played, the streamers flew and the crowds cheered; their loud ‘hurrahs’ filling the air as the world’s largest liner slipped gently away from the White Star berth at Southampton. The fateful maiden voyage to New York had begun.

It was a bitterly cold, crystal clear night and the sea was flat and calm. In the crow’s nest of RMS Titanic, four days out from Southampton, two vigilant lookouts shivered, the warmth of their breath steaming in the freezing air. Then, at 11.40pm, they saw it dead ahead – an iceberg. With adrenaline pumping through their veins they rang the warning bell and hailed the bridge, but it was too late. The lookouts could only stare in horror as the ship’s starboard side struck the deadly ice.

A few days earlier, however, the scene had been so different. The RMS Titanic presented a majestic sight as she sailed down Southampton Water and into the Solent accompanied by a flotilla of all shapes and sizes. It is this magical moment that Robert Taylor has chosen to commit to canvas. His latest painting, Titanic – Last Farewell, is dedicated to the memory and the Centenary of the Titanic’s fateful voyage.

Each print in this edition has been hand-signed by the artist and numbered.

The Centenary Edition, Remarques and Remarques

Uniquely, a small number of prints in Robert Taylor’s superb new release were personally autographed by Titanic Survivor Millvina Dean during her lifetime. In agreement with her these exclusive prints are only now being released to commemorate the 100th Anniversary of this infamous event, creating a poignant and truly historic piece for collectors of Titanic memorabilia.

In this special two print edition, only THIRTY-FIVE signed and numbered copies of Robert Taylor’s working pencil drawing for Titanic-Last Farewell will be issued, along with the main print which is signed by Titanic survivor Millvina Dean.

Each pencil print is conservation matted to include a highly collectable sample of coal actually recovered from the boiler rooms of the Titanic. Recovered by RMS Titanic Inc. during their expedition in the summer of 1994, these pieces of genuine Titanic coal are the ONLY artifacts from the wreck site that can be legally sold to the public.

Each canvas is signed by the artist and individually numbered.