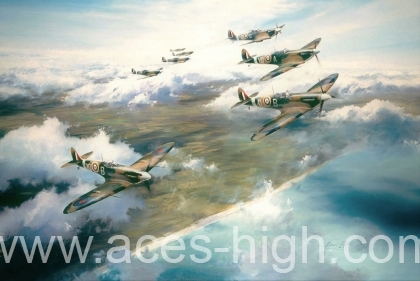 They were one of the great fighter units of World War II. Led by the audacious Douglas Bader - who had lost both his legs in a pre-war flying accident - the Spitfire Wing at Tangmere was in the thick of the action during the tumultuous aerial battles that took place over the Channel and Pas de Calais in 1941. Duelling on a daily basis with the cream of the Luftwaffe, especially the pilots of Galland’s JG26 based at Abbeville, many of Bader’s young Spitfire pilots were to become some of the RAF’s greatest fighter leaders: Names such as Hugh ‘Cocky’ Dundas, Ken Holden and Johnnie Johnson who all signed these now extremely rare prints together, of course, the signature of Douglas Bader.

Robert Taylor is one of the few artists who personally knew Douglas Bader and who benefitted from the great fighter leader’s knowledge. The striking piece, which portrays Douglas Bader leading his Wing in ‘Finger Four’ formation across the Sussex coast towards France on a fighter sweep in early 1941, was composed with a great deal of technical and historical input from Douglas Bader and such is their scarcity that pristine examples of these highly-sought after pieces rarely, if ever, appear on the secondary market.