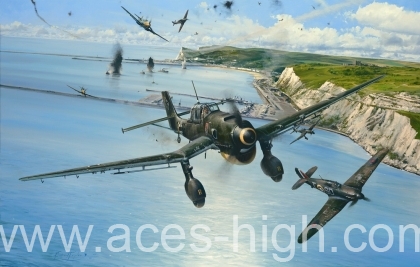 The Junkers Ju87 Sturzkampfbomber, known to the British simply as the Stuka, had already acquired a deadly reputation across Europe, its siren screaming as the ungainly dive-bomber struck terror into the hearts of those below. In 1940 its pilots crossed the Channel with their grim-looking aircraft to terrorise the southern towns and ports of England.

In the battle that followed, Hurricanes of 501 Squadron tangle with Ju87 Stuka dive-bombers and Me109s during an enemy attack on vessels and port facilities in Dover Harbour. High explosive bombs detonate within the sheltered anchorage as escorting Bf109s from JG51 race in to protect their lumbering charges. It is 29th July 1940. The Battle of Britain is approaching its height yet the exhausted RAF pilots are able to beat off the attack, despatching four Stukas and two Me109s, for the loss of just one of their own.

This outstanding release from the master of Aviation Art is an example of an artist at the peak of his ability. Robert has produced a simply amazing painting and with the prints personally signed by Luftwaffe and RAF veterans of the Battle of Britain, this makes for a very collectable piece.

Each print has been signed by one of the last surviving Luftwaffe Stuka pilots from the war along with two pilots that flew Hurricanes with 501 Sqn in the Battle of Britain:

The SIX signature Collectors Edition is also signed by the following veterans of the Battle of Britain:

Although he passed away in 1994 this outstanding edition was individually hand signed by General Johannes Steinhoff in England, September 1990, and can now be released under arrangements made at that time with General Steinhoff.

With ALL the components of the Generals Edition, the Tribute Proof Edition is released with a unique, ORIGINAL, hand-signed and hand-numbered pencil drawing by artist Robert Taylor, matted to include the authentic wartime signature of HANS-ULRICH RUDEL, the most successful Stuka Ace in history, his wingman HELMUT FICKEL, together with three other eminent Stuka pilots, all holders of the Knights Cross. The main print, Open Assault, is also signed by Battle of Britain Luftwaffe Ace Hans-Ekkehard Bob, creating a highly collectable FOURTEEN signature edition.