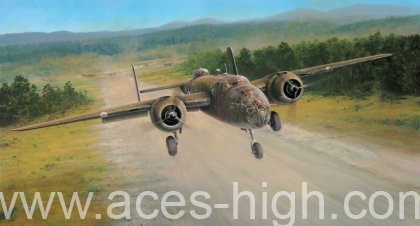 In early April 1942, under the command of General Ralph Royce, and almost a week before the Doolittle raid – seven B-25C Mitchells and three B-17 Fortresses of the 5th Air Force, lifted off from their base in Australia and headed for the staging field at Del Monte on Mindanao, in the Philippines. For three days from 12 April, this small fleet of intrepid aircrews flew bombing missions against Japanese shipping, docks, and ground installations in Manila, Cebu, and Davao, the Royce Raids being among the very first to inflict air strikes against the Japanese in World War II.

Richard Taylor’s painting shows one of 5th Air Force B-25C Mitchells taking off from the Del Monte on the island of Mindanao on Sunday 12 April 1942, en-route to hit the harbor and shipping targets at Cebu. In the three days of Royce’s raids, the Mitchells flew over twenty sorties, sinking and seriously damaging three Japanese transport ships, and shooting down three enemy fighters. In a triumph of surprise aerial strikes, all seven B-25s and their crews returned safely to base.

Each print in the edition is personally signed by one of the original aircrew on the raid - one of only two surviving veterans - who flew on the B-25 depicted in this exciting release.