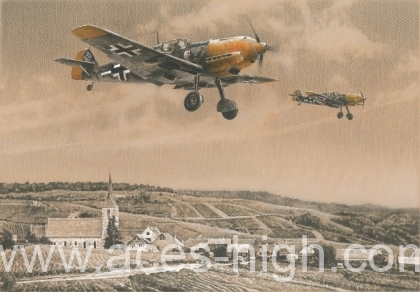 When Willi Messerschmitt’s all-metal Bf109 made its maiden flight in 1935, bi-plane fighters were consigned to history – monoplanes were the future.

Honed by the Condor Legion during the Spanish Civil War and put into practice in the conquest of Poland, the Messerschmitt Bf109 was one of the most advanced fighters of its time; well-armed with an all-metal monocoque construction, an enclosed all-weather cockpit, retractable landing gear and a liquid-cooled inverted engine, it formed the backbone of the Luftwaffe’s Fighter Arm.

Constantly upgraded, its eternal battles with the Spitfire and Mustang lasted until the last day of the war. By then it was almost obsolete, having been superseded first by the Fw190 and then the Me262 jets, however with 33,984 built, more Bf109s were produced than any other fighter aircraft in history.

Richard’s superb masterwork portrays the iconic Bf109 at a time when this remarkable fighter reigned supreme – the summer of 1940. With Poland long crushed and the Battle of France now over, the Battle of Britain has begun. Yet amidst the fury of war, Richard has once again managed to convey the tranquillity of the French countryside as a pair of Bf109s prepare to touch down at a forward airfield.

Each print is personally signed by four iconic Luftwaffe fighter pilots who flew the Bf109 in combat during WWII, creating a sought after collector’s edition: