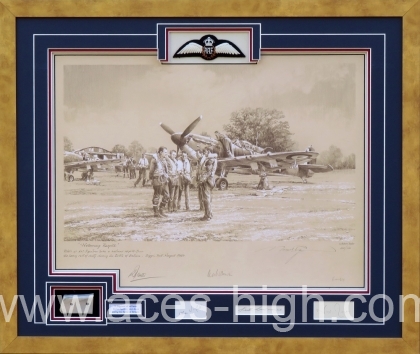 It has been another hard day of ferocious air combat over southern England, but at long last the young pilots of 603 Squadron can take a short, yet welcome respite from the heavy fighting. Soon however, the roar of Merlin engines will fill the air again as another deadly Luftwaffe raid threatens.

Robert Taylor’s masterpiece, beautifully crafted using a subtle combination of delicate graphite skilfully interwoven with subtle hues of the artist’s finest oil paint, rekindles the poignancy of one such moment in this, the most famous of all air battles in history – The Battle of Britain.

This superb book, published to commemorate the 70th anniversary of the Battle of Britain, showcases some of Robert’s most famous paintings. They include a host of stunning depictions of the iconic aircraft that duelled in the skies over southern England during the summer of 1940. It is presented in a silver embossed slipcase specially created for this edition.

This stunning framed piece is personally signed by three prominent Battle of Britain Spitfire pilots and conservation framed to include an original fragment of airframe recovered from a Spitfire that took part in the battle, plus the original autographs of a further three highly-regarded Spitfire pilots who flew in combat. A truly unique SIX signature collector’s piece: