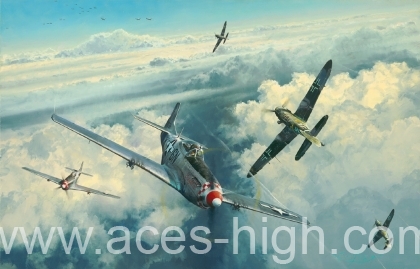 A Powerful Limited Edition by the World’s Premier Aviation Artist

The Third Reich was crumbling. As the long nights of winter grew increasingly shorter, by February 1945 the Allied forces on the ground were advancing ever deeper into German territory, tightening the noose on Hitler’s failing armies. In the air, the Luftwaffe was fighting a losing battle. Having lost control of the skies they were increasingly powerless to stop the Allied Air Forces degrading what little was left of the German war machine. Yet, short of fuel, aircraft, spare parts and pilots, the survivors fought on in a dogged but determined daylight struggle to stop the US Eighth Air Force bombers from reaching their targets.

From the moment the first long-range P-51 Mustangs had appeared in German skies, the Luftwaffe was, however, facing an uphill struggle. No longer did the American bombers have to fend for themselves as they ventured deep into enemy territory. With the introduction of the P-51 – probably the finest long-range piston-engine fighter of all time – they now had close escorts at all times and although it had taken months of grim and bitter encounters, the Allies had finally established total control of the skies. It was still no easy task for the Mustang pilots who had to remain ever vigilant, as battle-weary pilots of the Luftwaffe refused to surrender.

Robert Taylor’s bold masterwork The Eagles Divide portrays one of the many increasingly desperate Luftwaffe attacks on the big daylight raids undertaken by the heavy bombers of the Eighth Air Force to pound strategic targets still in German hands, as Bf109Gs from JG4 are once again thwarted in their attempt to attack a large force of American bombers over northern Germany in February 1945. Luckily for the bomber crews, eagle-eyed P-51 escort pilots from the 339th Fighter Group have quickly spotted the danger and dive to break up the enemy formation with a perilous head-on pass whilst, in the distance, their colleagues race to join the action and disperse the Luftwaffe attack.

In one of the most special editions to be released by the Military Gallery in recent years, prints in this highly-restricted edition are autographed by distinguished USAAF and Luftwaffe veterans who flew in combat during these close encounters over Europe during World War Two. Adding great historical importance, each signatory reached Ace status and together they clocked up many thousands of hours flying in combat during the war, representing both sides of this dramatic period of aerial conflict.

Along with artist Robert Taylor, every print carries the original signature of one of the Luftwaffe’s most prominent Aces who flew in combat during the Defense of the Reich:

Each print in these six signature editions is additionally signed by a highly-regarded Luftwaffe Ace along with four famous P-51 Mustang pilots who flew in combat with the USAAF as the Allies pushed for victory in Europe during World War Two:

With all components of the Collector’s Edition, every print in the twelve signature Tribute Edition is issued with an original pencil drawing by Robert Taylor. Each drawing is signed by three highly-regarded Luftwaffe Aces:

Each of these stunning works of art has been individually conservation matted to include the original pencil signatures of three distinguished P-51 Mustang Aces: