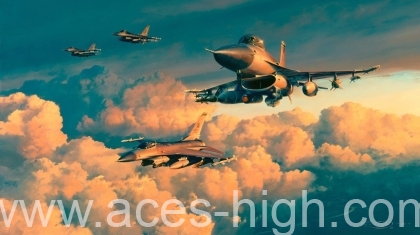 The date: May 31, Memorial Day 1999. Lt Col Dave "Fingers" Goldfein checked in as Mission Commander and Forward Air Controller (FAC) for the three hour Kosovo Engagement Zone (KEZ) period. The target, Serbian fielded forces on the move in southern Kosovo in the Mount Pastrik area. Words passed through airborne command and control were to stop the ground offensive taking place in the villages below. The Kosovo Liberation Army had launched an attack on Serbian forces that had turned ugly and they were in full retreat to the hills to the south.

The objective - stop the Serbs and cover the KLA. Immediately, a plan to maximize offensive firepower was put into action. The second set of FACs, led by Capt "Boomer" Ross from the 510th Expeditionary Fighter Squadron (EFS), headed to the tanker so they could rotate in and keep the iron flowing. The F-16CJ force protection SEAD assets from the 23rd EFS at Spangdahlem, with their load of high-speed anti-radiation (HARM) missiles, repositioned their orbit in order to provide complete coverage of the target area. Fighters checked in, ready for guidance from the FAC. Verifying the location of the enemy with his maps of the area and looking in his infrared targeting pod, "Fingers" rolled in for the first mark with his “willie pete” White Phosphorus rockets. Bracketing the area below, the first set of fighters, F-16s from Aviano AB, saw the marks and set up for their attack. For the next several hours and into the night, fighter after fighter checked in and was sequenced into the target. It was a good day to be a NATO airman and a bad day to be a Serbian ground troop.

Robert Taylor's powerful painting shows F-16s from the 31st (nearest) and 52nd Air Expeditionary Wings, as they climb out of Aviano air base in northern Italy, headed for southern Kosovo. Carefully researched during visits to Aviano, and with the advantage of first hand advice from its operational F-16 pilots, Robert has produced a magnificent study of what many believe to be the most beautiful of all modern combat jet fighters. VIPER VENOM is destined to become a popular best-seller among international aviation art collectors.

Each print is individually signed by two F-16 fighter leaders, both of whom flew in combat during Operation Desert Storm and Allied Force.