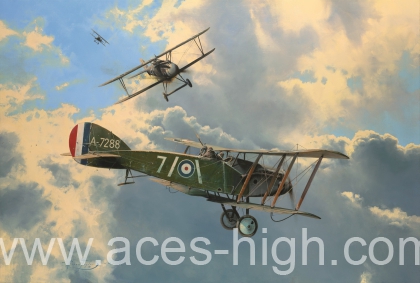 McKeever, a Canadian volunteer, was the squadron’s top Ace, scoring most of his 31 victories on the Bristol Fighter, or the “Biff” as it was affectionately known by its pilots. Lt. Powell is seen pumping a deadly burst of machine gun fire into a diving Albatross as the aerial duel wheels and turns in a magnificent skyscape high above Cambrai.

It is incredibly rare to find editions that have been personally signed by aviators of World War One, so this release by the master of Aviation Art is particularly special. Part of the edition was signed some years ago and kept in storage which explains these outstanding signatures:

Every print in the edition has been signed by the artist Robert Taylor and hand-numbered, and is issued as a pair with a matching-numbered companion drawing CAMELS ON PATROL signed by World War One fighter pilot:

The Artist Proofs and Remarques also have the main print signed by Henry Allingham, who at age 112 at the time of signing was the oldest surviving combatant from the First World War.

In addition to Henry Allingham’s signature on THE BIFF BOYS, and Henry Botterell’s signature on CAMELS ON PATROL, a separate special companion print CLOSE SHAVE, solely issued with this portfolio and personally signed by Charles E. Watson RFC, observer/gunner on Bristol Fighters with 11 Squadron during the First World War. It has been conservation matted with the RFC Wings and Blue Max to include the signature of the legendary Manfred von Richthofen.