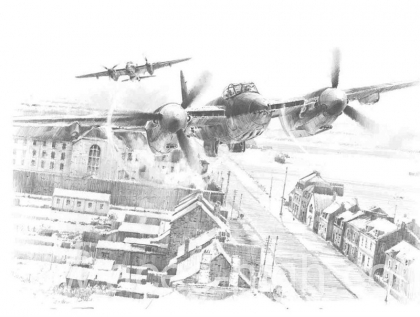 On the 18th February, 1944, a group of brave young aircrew undertook one of the most daring low-level precision bombing operations ever mounted during World War II – the breaching of the wall of Amiens Prison to release members of the French Resistance, condemned to death for their action in helping the Allies. After pleas from the French Resistance, a formation of RAF Mosquitoes from 487 Squadron (New Zealand) and 464 Squadron (Australian), under the overall command of Group Captain Pickard undertook the daring and dangerous mission. Their task was to break open prison walls in order that the patriots could have a chance to escape; it was their last and only chance to live. The raid was a success. The walls were breached and the cell doors sprung by the bomb blasts allowing over 150 prisoners to flee the jail across the snow to be spirited away by the Resistance.

Each print in this edition is signed by the artist Robert Taylor together with Squadron Leader Ian McRitchie DFC who led the second flight of 464 Squadron on the Amiens Prison Raid:

Every print in these editions is signed by the artist Robert Taylor together with three pilots who took part in the raid on the Amiens Prison Raid.