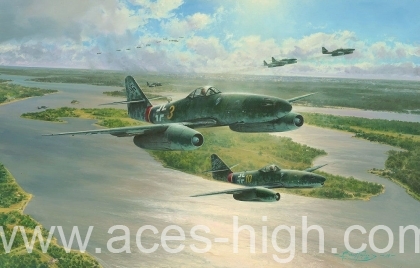 The Me262 was sleek, beautifully proportioned and deadly, and with a top speed of around 540mph was a 100mph faster than anything in the Allied arsenal. It could have changed the course of the war.

April 1945: and the end of the war was growing closer. By now the weather was improving and, as the days began to lengthen, the American Eighth Air Force was able to dispatch well over a thousand bombers, with a fighter escort to match, on some of the largest raids of the war. The Allies’ overwhelming strength meant the contest was all but one-sided; yet the expert pilots of the Luftwaffe were still a force to be reckoned with – especially when armed with their revolutionary Me262 jets.

Had Hitler recognized the jets’ full potential as a fighter, as Adolf Galland had pushed for, then the course of the war might have been very different. But he didn’t, and by the time this radical new jet was put into mass production as a fighter, it was too late to save Hitler’s Reich.

Although some 1,400 Me262s were built, rarely more than a couple of hundred were fully operational at any one time, continually hampered by shortages of fuel, spare parts and trained pilots. American factories, in contrast, could build that number of combat aircraft in a day.

Even so, Allied bombers had frequent contacts with Me262s, especially those of JG7, and had run into serious trouble from the large jet formations that the Gruppe had managed to assemble. Eight B-17s had been lost in one such encounter and the Fortress crews were more than wary of what they might expect as they battled through the skies above what remained of the Nazi heartland.

Robert Taylor, the master of aviation art, portrays the Me262s of III./JG7 in his powerful painting as a tribute to this revolutionary aircraft. He captures a scene during the final weeks of the war as Leutnant Hermann Buchner, by now one of the most famous jet Aces and recipient of the coveted Knight’s Cross, joins his fellow pilots of III./JG7 as they climb to intercept a large formation of American bombers having just left their base at Parchim. Below them the tranquillity of the meandering River Havel, flowing gracefully through the countryside west of Berlin, is in stark contrast to the deadly encounters that will soon take place overhead.

Adding great historical importance, the prints in this powerful edition are autographed by some of the most highly-decorated pilots to fly the Luftwaffe’s revolutionary jet aircraft including Hermann Buchner himself. This is likely to be a landmark edition from the world’s most collected aviation artist with a collection of signatories that will sadly never be repeated.

Every print is individually numbered and personally signed by the artist, Robert Taylor, together with two highly-regarded Jet pilots, including the Ace featured in Stormbirds Rising:

Each print in this memorable four signature edition is signed by two more prominent veterans who flew Luftwaffe jets in combat during the final days of the war in Europe:

This historic seven signature edition is additionally autographed by a further three famous Luftwaffe Aces who flew Me262s in combat with JG7 during WWII:

THE REMARQUES - Regarded as the world’s finest aviation artist, Robert Taylor’s original work is extremely limited so a hand-drawn pencil Remarque is one of the best ways to own a unique ‘one of a kind’ piece of his artwork. Each print in the edition will have a delicately crafted original pencil drawing, skilfully created by Robert in the lower margin.

Every Remarque drawing is different and unique!

The DOUBLE REMARQUES, restricted to just 10 copies worldwide, will be issued with a double size drawing, even larger and crammed full of detail and content.

With an ORIGINAL PENCIL DRAWING and TWELVE signatures!

With all signatures of the Aces Edition, each print is issued with an exquisite original pencil drawing, specially created for this edition by Robert Taylor, which is signed by two leading fighter Aces who flew the Me262 jet:

Each drawing is conservation matted to include the original signatures of a further three famous Luftwaffe Me262 Aces who fought in the skies over Germany towards the end of war: