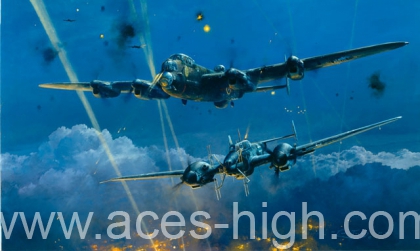 Some pieces are very special; they possess a magic ingredient that is almost beyond definition. It’s sometimes called the ‘it’ factor, an unknown formula that results in a touch of brilliance. Lancaster under Attack is one such piece, combining, as it does, a brilliant composition, an emotive story and some very special signatures.Night scenes are notoriously difficult to paint but here the artist achieves a perfect composition, brilliantly using the moonlight to illuminate the two combatants whilst the glare of searchlights, burning fires and exploding shells puncture the night sky with iridescent golden hues.

The painting sets the scene in the night skies over Osterfeld during a raid carried out in December 1944. The Lancaster, from 626 Squadron, is forced to take evasive action as an Me110 G-4 night-fighter make a close pass beneath it. Both crews are locked in a desperate duel as they bid to manoeuvre each other. The Lancaster, hampered by damage, jinks through the darkness whilst the Me110 pilot dives away to avoid the stream of tracer emanating from the Lancaster’s front turret. The contest could go either way.The last factor in the success of Lancaster under Attack came from the two highly decorated pilots from opposing sides who came together in mutual respect to sign the prints. Lancaster pilot Flight Lieutenant Bill Reid was awarded the Victoria Cross when, seriously injured by gunfire following attacks by Me110 and Fw190 night-fighters, pressed on for another 200 miles, bombed the target, and although weakened from loss of blood, somehow got his surviving crew safely home. Major Martin Drewes, on the other hand, was one the most formidable Luftwaffe night-fighter pilots who, between 1941 and 1945, completed 235 combat missions in the Me110 and achieved 52 aerial victories. In 1944 he was promoted to command III./NG1 and was holder of the Knight’s Cross and Oak Leaves.

First published in 2000, Lancaster under Attack was issued as one half of a combined book and print set. Not only did you get an outstanding limited edition print but an equally lavish copy of Robert Taylor’s highly acclaimed book of Air Combat Paintings Volume IV.

Each copy of Lancaster Under Attack has been signed by the artists and by: