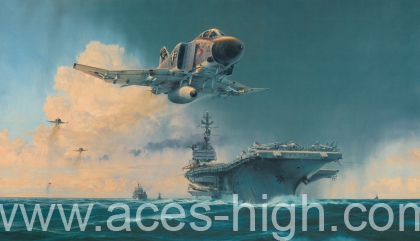 It was 19 January, 1972, aboard the USS Constellation in the Gulf of Tonkin. As Cunningham shut down the engines of his 'Fighting Falcons' F-4J Phantom, Task Force 77 Commander Admiral Cooper, ship's CO Captain Ward, squadron commanders, and the rest of VF- 96's crews were there to congratulate Cunningham and Driscoll on achieving their first kill. It was the first of five air victories, Cunningham and Driscoll becoming the US Navy's only Aces of the Vietnam war. After the usual vision-blurring catapult off the deck, Cunningham's F-4J headed for the North Vietnamese airfield at Quang Lang, suspected of basing MiG-21s. His three-ship section was tasked to intercept any MiGs that threatened the reconnaissance RA-5C Vigilante mission as the force approached the enemy airfield.

As the RA-5C came under severe fire from AAA and SAMS, Cunningham dodged two missiles, plunging downward from 15,000 feet in the process. Spotting two Bai Thiong-based MiG-21s below, he tracked them just above the jungle tops, closing to within range of his heat-seeking Sidewinders. The MiG pilot broke hard, throwing off the missile, and Cunningham immediately gave his attention to the second enemy fighter. Firing a second Sidewinder, the missile scored a direct hit, blasting off the entire tail section of the MiG, sending is crashing straight into the ground in a ball of fire. Cunningham was now fired up and ready for more, but the dependable Driscoll called attention to the low fuel state from the back seat, and they turned back toward Laos for the long flight back to the Constellation.

Robert Taylor's spectacular painting shows Cunningham's F-4J Phantom, feet above the murky waters of the Gulf of Tonkin, passing the USS Constellation at 500 knots. The mighty carrier was running out of water in the small Gulf as Cunningham called up the Air Boss requesting the traditional victory roll. "Negative, land immediately." was the terse reply. The mood aboard however was one of celebration for the crew of VF-96's Phantom, call sign 'Showtime 112'.

Each print of Phantom Showtime is authenticated by legendary US Navy Aces.