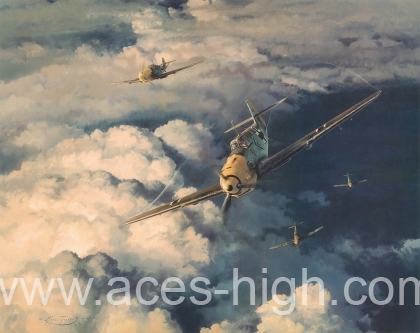 With the traditional battle cry Horrido! ringing in their ears, Squadron Commander Hptm Wolfgang Ewald leads pilots of I./JG52 into combat. Based at Coquelles/Calais in September 1940, the JG-52 Me109s hurtle down in a high-speed dive to engage the enemy during the ferociously fought Battle of Britain.

In his tribute to the courageous flyers of the Luftwaffe, Robert eloquently depicts these sleek and deadly fighters high over the Channel, glinting and menacing against an ominous backdrop of heavy cumulous clouds - the world's foremost aviation artist's skill bringing to life the Luftwaffe's most successful fighter aircraft in action.

This is quite simply an outstanding painting and vintage Robert Taylor at his very best. Horrido! quickly became an all-time classic.

Each print is personally signed by TEN of the highest scoring Luftwaffe Aces alive holding a total of 1225 victories between them - a staggering feat - and the special editions include the original signatures of up to EIGHTEEN legendary Aces - amassing a staggering total of 2770 victories:

The Knights Cross Edition includes an ORIGINAL pencil drawing by Robert which is conservation matted to include the original signatures of:

The Knights Cross Tribute Proofs include all of the above plus the following original signatures: