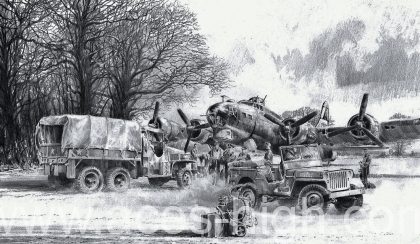 There is a brief moment of calm as B-17 ‘Skipper’ of the 367th Squadron, 306th Bomb Group returns to base at Thurleigh in East Anglia after another grueling daytime mission over occupied Europe, January 1945. One of the longest serving Flying Fortresses of the war, ‘Skipper’ completed over 100 combat missions despite suffering from battle damage in late 1944.

Robert’s superb graphite edition acts as a lasting tribute to the brave aircrew of the USAAF who flew the mighty B-17 in combat during WWII.

Each print has been personally autographed by four prominent veterans who flew Flying Fortresses in combat over Europe including KEMP MCLAUGHLIN who was the lead pilot on the second Schweinfurt mission and ROBERT SHOENS who took part in the first USAAF daylight bombing raid to Berlin:

We have a few copies of the Limited Edition that are available conservation mounted to include museum quality reproduction USAAF wings.