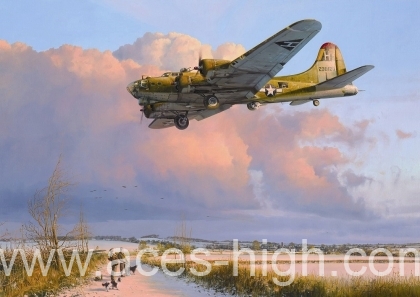 This classic Robert Taylor painting portrays the stark contrast between the peaceful English countryside of the 1940’s, and the harsh reality of the mighty war machines of the day.

From the summer of 1942 until the end of hostilities, the USAAF’s Eigth Air Force took the battle to enemy-occupied Europe every single day that weather permitted. The largest air unit ever to go to war, the Eigth played a vital role in the ultimate defeat of Hitler’s Germany. In the forefront of this awesome fighting force, the crews of the mighty B-17 Flying Fortress will be remembered forever.

Robert depicts ‘Skipper’, one of the longest serving B-17 Fortresses of the war on a cold afternoon in late January 1945. After surviving severe battle damage in late 1944 'Skipper' and other B-17's of the 367th Squadron of the 306th Bomb Group, return to base at Thurleigh in East Anglia.

Joining artist Robert Taylor in signing every print are FOUR highly distinguished Aircrew who flew the B-17 in combat during World War II.