ESCORT FOR THE STRAGGLER 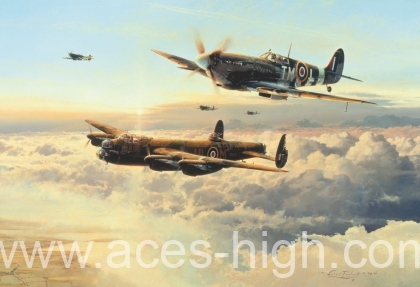 On 25 April 1945 the RAF despatched over 300 Lancasters to attack ‘The Eagles Nest’, Hitler’s private mountain top castle at Berchtesgaden. It was a symbolic raid, for the war was almost over, but it seemed appropriate that after nearly six years of continual combat, crews of the RAF should be allowed this almost final gesture of the air war in Europe.

Two aircraft, above all others, came to symbolise the deeds of the men and machines of the RAF: The Spitfire, magnificent in defence, lethal in attack, and the mighty Lancaster, the awesome heavy bomber that took the war to the heart of Nazi Germany.

To pay tribute to these two legendary aircraft and the men who flew them, Robert’s emotive painting depicts Spitfires escorting damaged Lancaster UL-M2 of No. 576 Sqn as it crosses the English coastline. UL-M2 completed 140 operations, more than any other Lancaster in the war.

This iconic print has become a classic in aviation art and much sought after on the secondary market. Three different versions were produced, each with a different companion print and with different signature versions.

Published to commemorate the British and Allied aircrews who flew with the RAF during World War II, this edition was available outside of Britain only by special request.  It was signed by:

Published to commemoratethe RCAF Aircrews that flew with the RAF during World War II, this edition was only available outside of Canada by special request.  It was signed by:

Published to commemorate the Royal Australian and New Zealand Airforce aircrews that flew with the RAF during World War II, this edition was only available outside of Australia and New Zealand by special request.  It was signed by: