SALUTE TO THE BRAVE 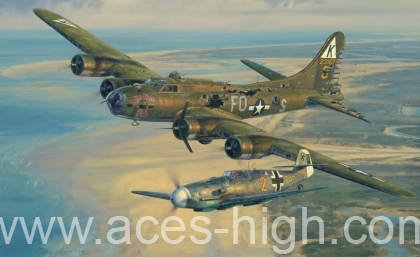 It was the crew’s first mission together; a raid on the Focke-Wulf fighter production factory in Bremen, but for rookie pilot Charlie Brown, on only his second combat mission, 20 December 1943 quickly turned into a nightmare. Flying with the 527th Bomb Squadron, his B-17 Ye Olde Pub was badly damaged over the target as intense, accurate flak took out one engine, damaged another and shattered the bomber’s nose. Down on power and slowing, he’d still managed to press home the attack and release his bomb load on target but, as they turned and headed for home, the crew found themselves falling behind the main formation. The straggler now became a magnet for the encircling enemy fighters, who pulverised the already battered Fortress.

Damage was severe: the rudder and port elevator were shattered and a third engine hit; the hydraulics, electrics, radio and oxygen systems were in pieces and the weapons froze. The fuselage was shredded by deadly cannon fire, killing the tail gunner and wounding others, including pilot Charlie Brown who was dazed and losing blood. The embattled Fortress soaked up the onslaught and somehow, but he didn’t know how, the rookie pilot kept the flying sieve in the air – just – because Ye Olde Pub was close to stalling.

It wasn’t long before Franz Stigler’s Bf109 was spotted approaching at speed; all on board believed their days were now finally numbered. But Luftwaffe Ace Stigler had other thoughts.

A seasoned Bf109 veteran with JG./27 who had previously served in North Africa, Sicily and Italy, Stigler was also a chivalrous opponent, and as he circled the wrecked B-17 he could clearly see the dead tail-gunner and other badly wounded men obviously unable to bail out. Compassion took the better part of valour. It would have been ‘like shooting at a man in a parachute’ he was reported to have told Associated Press after the war and instead of shooting down the Fortress, with her dead and wounded, Stigler escorted the bomber over the North Sea coast on a heading for England – a scene brilliantly recreated in Anthony Saunders’ piece in which before departing, Stigler looked the relieved Brown in the eyes and raised his hand in a Salute to the Brave.

Stigler never reported the incident. Had he done so he would in all probability have been shot as a traitor yet many years later, through serendipity and good fortune, both men would meet again and become firm friends.

Widely considered as some of the best and largest in the industry, Anthony’s unique pencil remarques are individually created in the lower margin of the print. The first edition, consisting of 25 single sized remarques similar in concept to the drawing depicted, are a perfect way for enthusiasts to collect original art. If you have any particular request, such as a specific aircraft or markings, please ask when placing your order and we’ll do our best to accommodate.