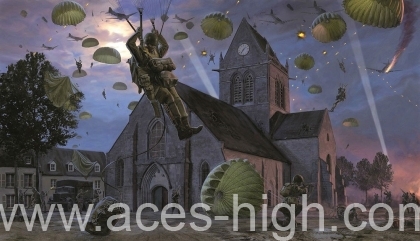 Captured by the US 82nd Airborne in the early hours of D-Day, Sainte-Mère-Église would become the first town in France to be liberated by the Allies.

The small town of Sainte-Mère-Église, at the foot of the Cotentin peninsula, is just five miles inland from Utah Beach, the most westerly of the five assault beaches for D-Day and critical to the Allies’ right flank. The town lay beside the main highway from Paris that ran north from Carentan to the port of Cherbourg, and which provided a vital link to any German forces engaged in the defence of the area. Vital to ensuring a successful landing on Utah,  the task of securing the town and road together with the nearby railway line and bridges over the River Merderet, was given to one of the best units in the US Army – the battle-hardened paratroopers of the 82nd Airborne Division.

In the early hours of 6 June 1944, after a widely scattered drop, some in the Division’s 505th PIR found themselves landing right in the heart of the town, caught in the glowing light cast by a burning building. With the white silk of their parachutes clearly visible, many of the men hanging defencelessly beneath them were easy targets. The casualty rate was high but, after regrouping with other units, the men of the 82nd attacked in a ferocious assault and a fierce firefight with the German defenders soon erupted. By dawn it was over and with the capture of the town the Stars and Stripes now flew over Sainte-Mère-Église.

The scene is superbly illustrated in Simon’s dramatic piece and the prints in this moving limited edition have been individually signed by two 82nd Airborne veterans who took part in the capture of the town, guaranteeing a lasting link to this famous episode in history. The name ‘Sainte-Mère-Église’ will be forever associated with the highest levels of bravery shown by the airborne forces in World War II, and this historic edition represents a lasting tribute to them.

Joining artist Simon Smith in individually signing each print in the limited edition are two veterans who fought with 82nd Airborne at Sainte-Mère-Église:

The US Airborne Tribute Edition

Each print is issued with a specially commissioned original pencil drawing by Simon Smith which has been signed by two distinguished US Airborne veterans who jumped into Normandy on D-Day:

Each unique drawing is conservation matted to include the original pencil signatures of a further two veterans who served with the famous ‘Band of Brothers’, Easy Company, 101st Airborne.

This is un-signed by the artist or veterans and is smaller than the Limited Edition.