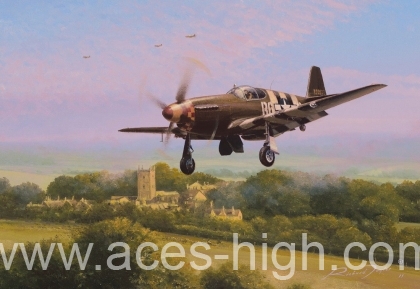 As the welcoming English landscape races beneath him, an exhausted pilot steadies his P-51B in preparation to land at his 8th Air Force airbase in Suffolk.

Acknowledging the vital role played by the pilots who flew the iconic Mustang, Richard's superb piece recreates a common scene across the East Anglian countryside as the Allies pushed for victory during WWII.

This outstanding cameo is available individually or as a pair with COLTISHALL SCRAMBLE.

Each print in every edition is personally signed by the artist and hand numbered. It is also signed by TWO Aces that flew the P-51 in the European theatre during WWII:

Each of these SIX signature proofs is conservation matted to include museum quality US Pilots wings and the original signatures of a further four distinguished Aces that flew the P-51:

Regarded as one of the most gifted exponents of pencil work in the industry, Richard will hand-craft an original drawing in the lower margin of these prints. Each is then matted to include all components of The USAAF Tribute Edition.

If you have any particular request, such as specific aircraft markings, please ask when placing your order and we will do our best to accommodate.