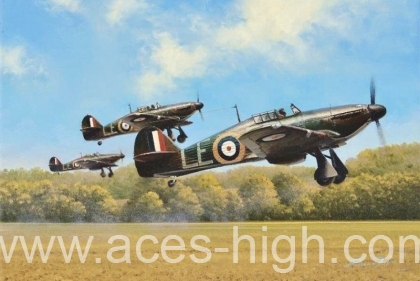 Mk.I Hurricanes of 242 Squadron, under the command of Squadron Leader Douglas Bader, scramble from Coltishall during the height of the Battle of Britain.

Acknowledging the vital role played by the pilots who flew the famous Hurricane during the summer of 1940, Richard's superb piece recreates a relative moment of calm as the brave young RAF pilots will soon be in action, intercepting Luftwaffe raiders heading to targets at Duxford and North Weald.

This outstanding print is available as a pair with SAFE ARRIVAL.

Each print is personally autographed by two pilots who flew the Hurricane in combat during the Battle of Britain:

With the two signatures listed above, this special copy has been double-mounted, ready to slip into a frame of your choice.

Each of these SIX signature proofs is conservation matted to include museum quality RAF Pilots wings and the original signatures of a further four distinguished Battle of Britain Hurricane Aces:

Regarded as one of the most gifted exponents of pencil work in the industry, Richard will hand-craft an original drawing in the lower margin of these prints. Each is then matted to include all components of The Battle of Britain Tribute Edition.

If you have any particular request, such as specific aircraft markings, please ask when placing your order and we will do our best to accommodate.