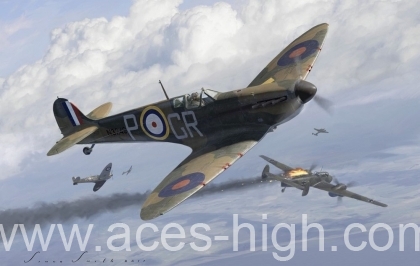 Flying one of the squadron’s newly-acquired Mk.I Spitfires, Flying Officer Robert Stanford-Tuck, a flight commander with 92 Squadron, destroys a Messerschmitt Bf110 heading to attack British forces encircled near Dunkirk on 23 May 1940. Over the next few days whilst covering the evacuation, he destroyed another four enemy aircraft, took a share in another and damaged two more.

Having great success in the Battle of Britain and later leading the Duxford Wing in 1941, Bob Stanford-Tuck was one of the great RAF fighter Aces of the war. With his score of confirmed victories standing at 27 and 2 shared, Tuck was shot down by enemy flak whilst leading a low-level ‘Rhubarb’ sweep over northern France on 28 January 1942 and was taken prisoner.

To add provenance, within the mount our expert team have included a photograph and the original autograph of the famous Ace depicted: