RETURN OF THE FEW 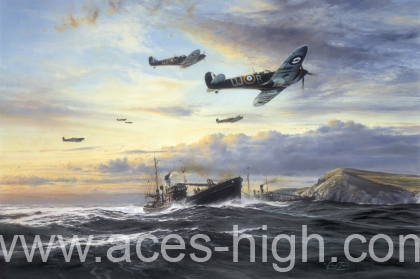 What do Johnnie Johnston, the Allies’ top-scoring fighter Ace, Al Deere, top-scoring New Zealand Ace and pilot of the first Spitfire to engage an Me109 in combat; Peter Townsend, the popular Battle of Britain Squadron Commander, and Bob Stanford-Tuck, one of the most outstanding fighter Aces of WWII all have in common?

They all signed Return of the Few, published by the Military Gallery nearly 30 years ago to commemorate the 50th Anniversary of the RAF’s iconic fighter, the Supermarine Spitfire. And what could have been more fitting than having this haunting portrayal of six Spitfires returning over the Channel to that familiar strip of English coastline, signed by four of Fighter Command’s most renowned and successful fighter Aces!

This stunning image has become one of the most resonant pieces yet published, and, ingrained in the minds of so many aviation art collectors, is highly collectible. Some copies exposed to daylight for too long are starting to show signs of premature fading which is why, where possible, we only source copies in mint condition.