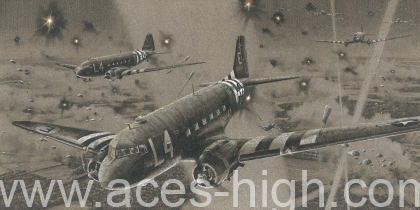 ‘You have a rendezvous with destiny!’ – Major General William Lee had promised the men of the 101st Airborne Division. And in Normandy that rendezvous would be kept.

For the American amphibious landings on Utah and Omaha beaches to succeed, the bravery and skill of the elite US 101st and 82nd Airborne Divisions would be called upon. Their task sounded simple enough – they must secure the entire right hand flank of the D-Day beach-head. In reality it was a hellish assignment, for if they failed the fate of US First Army and the success of Operation Overlord would be at risk.

Shortly after midnight on the morning of 6 June 1944 the two US Airborne Divisions began their precarious assault. Dropping into enemy territory at night and under heavy fire, the two airborne divisions had but a few hours in which to fulfil their initial orders before the amphibious landings began.

Richard’s dramatic edition recalls the heroism of these paratroopers. Battling through low cloud and pockets of intense flack, C-47 pilots from the 439th Troop Carrier Group steady their aircraft to allow elements of the 101st Airborne Division to drop inland behind Utah Beach in the early hours of D-Day.

The night will be long and dangerous but the paratroopers’ forthcoming resilience in the face of adversity will become the stuff of legend. Within a few frenetic hours the causeways exiting Utah will be secured, allowing thousands of infantry and hundreds of tanks to pour inland thanks to the heroic assault by the US Airborne divisions. Elsewhere the successful D-Day landings heralded the beginning of the bitter battle for Normandy and the start of the long campaign to liberate north-west Europe and help defeat the armies of Hitler’s Third Reich.

Completed in his trademark technique of using a mixture of graphite with subtle colour highlights, Richard’s superb piece helps commemorate the 75th Anniversary of D-Day and serves as a lasting tribute to all those who fought throughout the liberation of Europe.

Each print is personally signed by the artist, Richard Taylor.

Also available with a copy of the memorable book: LEGEND: The Story of the DC-3/C-47 Dakota

Order your copy of Richard's print RENDEZVOUS WITH DESTINY and a copy of the book LEGEND for a combined price of £60 + shipping!

AN EXCLUSIVE OFFER – ONLY AVAILABLE WHILST STOCKS ALLOW